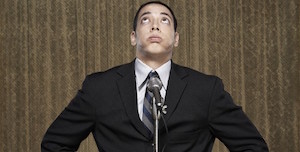 “According to most studies, people's number one fear is public speaking. Number two is death. Death is number two. Does that sound right? This means to the average person, if you go to a funeral, you're better off in the casket than doing the eulogy.” -Comedian Jerry Seinfeld

Does this famous stand-up line from Seinfeld surprise you? Or can you relate to one of the 40 million adults in the U.S. who struggle with anxiety, either chronically or in response to certain situations, such as public speaking? Speech anxiety, also known as glossophobia, affects an estimated 75% of all people.

Julie Norem, author of the book “The Positive Power of Negative Thinking”, reports that using defensive pessimism is an effective strategy for anxiety, according to a blog post from Penn State University.

If you suffer from glossophobia before presentations, start preparing for your presentation early so you have enough time to consider all of the horrible things that might go wrong, as well as think through solutions to each one of your concerns. You will not only feel less anxious, you will also likely produce a better presentation.

One of the common suggestions to people experiencing anxiety before a speech is: Stay calm. However, effectively taking your emotional and psychological experience from anxious to calm can be quite difficult.

On the other hand, excitement can have a positive impact on performance. A recent study by Harvard Business School uncovered the relative simplicity of transforming anxiety into excitement by saying phrases such as: I am excited, or get excited.

When you transform anxiety into excitement, you remove the negative consequences of feeling anxious, while maintaining the benefits of the adrenaline in your bloodstream, such as a heightened state of awareness.

If you experience anxiety before your next presentation, try going against conventional wisdom and be a pessimist who refuses to stay calm.