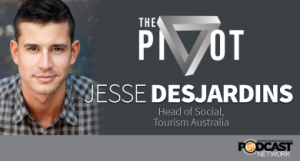 Jesse Desjardins is a go-getter. Throughout his career, he has gone after what he wanted to do – even if the first answer was no or a deadline had passed. Finding success in that approach to life, Jesse wonders why more people don’t just take a chance and strive to do what they’re passionate about.

In this episode of The Pivot, Todd Wheatland sits down with Jesse to find out how a Canadian became the Head of Social Media for Tourism Australia and to discuss all the difference SlideShare has made in Jesse’s life.

If you enjoy The Pivot podcasts, we would love if you would rate it, or post a review, on iTunes.

What May Surprise You:

-Jesse grew up in Canada but always had a fascination with Australia.

-Ten days after the application deadline, Jesse learned about the opening for Head of Social Media at Tourism Australia. He inquired to HR and was given until the end of the day to submit a resume. Never having written one, he searched the Internet and sent his newly created resume by 5 p.m. That night, he posted a presentation on why he wanted the job to SlideShare. The next morning it had 45,000 views and 200 comments. He was contacted for an interview by 8:30 a.m.

-Jesse’s off-duty hobby was designing presentations to post on SlideShare. He created the You Suck at PowerPoint presentation that a few million people have viewed. He also used SlideShare to plead his case for a trip to South by Southwest and viewers gave him enough money for the trip (this was before Kickstarter).

You Suck At PowerPoint! by @jessedee from Jesse Desjardins - @jessedee

-Jesse created Tourism Australia’s “censored kangaroo” image that went viral, caught the attention of media, and stirred a conversation about animal nudity. (The image showed a kangaroo on its back with its gender-identifying anatomy blurred.)

Jesse went back to university to earn his MBA because he thinks marketers need to learn more about business than they do about the latest social media fad. As one of his professors said, “You can’t base your strategy on someone else’s soundbites.”

Jesse asked his boss at a Paris advertising agency if he could attend the premier ad festival, Cannes Lions. His boss said he wasn’t going to waste company resources for the most junior person to attend.

Jesse stayed up all night to create a presentation about why he was the best person to go, outlining his available time, the sessions he would attend, and his plans to share what he learned with the rest of the agency. “You’re not sending me, you’re sending the whole organization,” he told his boss.

He got the OK with two caveats – don’t talk to anyone and don’t go to any parties. Jesse learned a lot and snapped 1,000 images of the event. He left without talking to anyone or going to a party. On the ride home, he curated the images into the 100 Best Slides of Cannes Lions and, just for fun, posted it to SlideShare.

The next morning, his SlideShare post had 80,000 views and his boss was fuming that Jesse had “talked” at Cannes Lions. Although Jesse didn’t technically break the rules, the effect was the same. He says he discovered that “[SlideShare] is such a powerful channel and a way to reach people.” A week later, Jesse was fired.

Your Community Can Drive Your Success

Jesse and his social media team serve a brand (Tourism Australia) that has so many touch points beyond their control. In essence, they promote other brands (i.e. destinations that are operated by other entities) across all its states, cities, and regions. When individuals get behind a Tourism Australia marketing message is when the team knows it’s uncovered something special.

Jesse says some are surprised that the small team doesn’t spend most of their time in creating the content. They talk on the phone and send emails to cultivate their bigger team of several thousand volunteers who contribute content and generate buzz about the content featured by Tourism Australia.

"The Holy Grail is when you can create something that other people tell your story for you. And you know what, it won’t be 100% perfect all the time, but I’d rather have this huge conversation, which is mostly on brand than have to have nothing at all."

For a full list of The Pivot archives, go to the main The Pivot: Marketing Backstories page.