5 Rules for Converting Customers on SlideShare 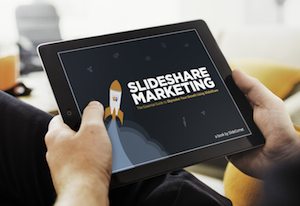 If there's anyone who understands how presentations can have the power to inspire and truly touch a person, it's Eugene Cheng. The first time he viewed “You Suck at PowerPoint,” by marketer Jesse Desjardin, he was so moved, he decided to launch a presentation design company of his own.

"I got hooked in an instant," Cheng, then a freelance graphic designer, says of Desjardin's deck. "I remember feeling enlightened as well as extremely excited at what I could do if I emulated his style and used some techniques he shared. His ideas were a no-brainer that signified the beginning of a new revolution of sorts. It sure didn’t start from me, but I wanted to be sure to carry this idea a lot further."

So Cheng put college on hold to partner with his classmate Kai Xin Koh, who shared "similar passions in creative work and communication via storytelling," to found SlideComet, a boutique presentation design firm in Singapore, in February 2013.

As a way for the small shop to get exposure, Cheng first turned to SlideShare.

“SlideShare was clearly an enabler for guys like Jesse to gain massive following and get noticed in a noisy world,” Cheng says. “The whole idea of democratizing content marketing and the lost concept of earned media really resonated with me at the time.”

The first deck Eugene published on SlideShare was “5 Tips to Becoming a Presentation Jedi,” which now has 81,700 views.

Soon after publishing, he then began receiving email requests for work.

“Having our first overseas client [from China] made us realize how our talent could benefit potential clients beyond geographical boundaries,” Koh says. “When people started asking when we would upload our next deck, we knew SlideShare was the right place for us to reach out to the right people – people who cared about presentations.”

The company has since uploaded eight presentations -- their top four all have more than 100,000 views. Clients now include large corporations like telecommunications company SingTel and international advertising and PR company Dentsu.

SlideComet's most recent SlideShare, How to Create SlideShares That Convert, showcases all the tips and tricks they’ve learned on SlideShare over the years.

Whether a deck takes two days or two weeks to make, SlideComet has a few rules it sticks by:

1) Relevant Links: Sprinkle different parts of the decks with relevant links. This way you get more opportunities to get decided actions from each view, rather than just at the end.

2) Re-Upload: After the initial traffic spike is over, re-upload your deck with more links pointing to different places. (“The ability for us to Re-upload decks is definitely a VERY powerful and overlooked feature.”)

3) Don't Focus on One Channel: Direct traffic to your other decks or channels. (“We definitely saw a spike in views overall; it helps to reawaken interest in oldie-but-goodie content that we've spent lots of time and effort on before.”)

4) Be Obvious: Use arrows and buttons to encourage clicks. Don’t try to be subtle.

“I would say anyone who has started a business from scratch would struggle to get the kind of global awareness we’ve gotten (100K views) in his or her first month of birth, without spending any marketing dollars,” Koh says. “We did it with SlideShare and we’ve seen many who did even better – we’re truly amazed by that fact still today.”

READ MORE: The Customer Complaint Heard ‘Round the World